Reviews, comments, musings on art around town and out of town when I go to places other than New York.  Here’s one on 2 gallery shows and art at MOMA.

2 galleries and a museum

Started with Kim Tschang-Yeul (b. 1929) at Almine Rech Gallery, 39 East 78th Street.  The show’s great-surveys one of the most fascinating series in contemporary art–Kim’s now six-decades and still ongoing waterdrop paintings he started doing in the 1960s and is still.  Kim is one of contemporary Korea’s most celebrated painters.  Visual, conceptual, tactile, illusionistic, abstract, meditative–Kim’s waterdrop paintings all that–more-you should go!–to April 14th. By way, I wrote on Kim in the 1990s–did a monograph on him–real pleasure to see such an excellent selection of his paintings. http://www.alminerech.com/exhibitions/4716-kim-tschang-yeul

Cy Twombly (1928-2011) at Gagosian Gallery, 980 Madison.  Two installations–the cycle of ten paintings Coronation of Sesostris (2000) in the big 6th floor gallery and Veil of Orpheus, 1968, a large four-panel painting- in the smaller 5th floor gallery.  Spread out along the walls before you in a truly enormous space Sesostris is a trip, literally–color, gesture, line–dare I say emotion–it moves!  Veil of Orpheus stuns!  Go over and take a look–at both–and see if Veil of Orpheus,  a painting done fifty years ago doesn’t get you thinking about “contemporary”.  It sure did me–and a lot!  With its surface-cum-ground inscribed with Twombly’s immutable pencil scribblings and wax crayon markings, Veil of Orpheus looks “contemporary” and of its time–very 60s–very art in process.  To April 28th. Here’s link to pictures and  information on the show.  https://www.gagosian.com/exhibitions/cy-twombly–march-08-2018

Walked down Lexington and over to MOMA on 54th Street–joined the crowds pouring into for free Friday night at MOMA.  Went to permanent collection on 5.  Liked the constructivist and abstraction gallery–here’s a photo of an Alexandra Exter painting on view.  Alexandra Exter (1882-1949) was one of the Russian avant-garde–spent time in Paris and also Rome–France and Italy–before the Russian revolution–source for other Russian artists on latest doings of French and Italian Cubists and Futurists–gifted artist, painter, designer–did sets and costumes for futuristic portion of early Russian sci-fi film Aelita, and cubo-futuristic sets and costumes for Tairov’s Kamerny theater.

Then on to the lower level galleries to have a look at Club 57: Film, Performance, and Art in the East Village, 1978–1983.  I was around the East Village for the 1980-1983 part.  Writer, independent curator. Coined the term Energism in 1980 for what was happening in art then.  Rich show–lots of photos, flyers, paper ephemera related to performance–there was a film playing in the show’s lower gallery while I was going around–more art maybe.  Here’s a photo of a segment from a dynamic Fred Brathwaite installation on view.  Color–all senses of it– definitely important component of that period. 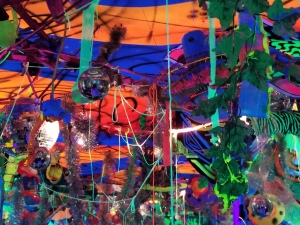